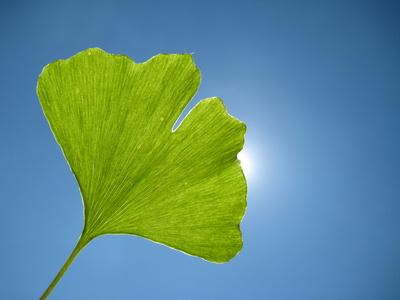 Ginkgo biloba is a well-known tree species renowned for its medicinal and nutritional properties. Also referred to as a ‘living fossil’, close relatives of this plant first appeared in the fossil record 270 million years ago during the Permian. The ginkgo tree is the only living representative of the "Ginkgoales", an otherwise extinct group of ancient seed plants. It was once widely distributed throughout the world, although today remnant native populations are restricted to China.

The distribution of Ginkgo biloba has been increased following the arrival of people. During the 1730s, Ginkgo biloba was transported by Dutch sailors from Japan to Europe and can now be found in many European gardens. Today this tree is cultivated in many countries throughout the world for ornamental and practical purposes.

Ginkgo biloba is a robust species. It adapts very well to a wide range of environments and can still thrive in urban settings, tolerating confined spaces and pollution. An extreme example of the hardiness of this plant can be seen in Hiroshima, where several plants close to the site of the 1945 atom bomb explosion survived and still thrive today.

Due to the adaptability of Ginkgo biloba it’s easily cultivated. This makes it much easier for suppliers of Ginkgo products to meet growing customer demands. After being grown almost exclusively in Asia, this tree is now commercially cultivated in the United States and Europe. There are several markets for Ginkgo biloba and in most instances tree crops are kept to a small statue and certain ingredients are harvested repeatedly. As the need for ginkgo wood is relatively low, rarely are these trees grown purely for logging and no cultivars have been selected solely for timber production.

Ginkgo biloba nuts are widely used throughout Asia in cooking. The nuts, also known as silver apricots are cracked open and the kernels are blanched in hot water and cooked. They are often included in rice dishes, custards, as well as being eaten as a salted and roasted snack. Ginkgo biloba nuts are easily purchased fresh from local stores throughout Asia, although canned varieties are more common in Europe. It’s important only to eat cooked Ginkgo nuts because the raw product can be toxic in large quantities.

The nuts add a unique flavour to dishes and offer many medicinal benefits. They are considered an aphrodisiac and are thought to help alleviate coughs, asthma, bronchitis, digestion problems, urinary disorders, skin sores and scabies.

Ginkgo biloba is perhaps more widely recognised as a plant extract in a range of medicinal supplements in Europe. This plant is rich in bilobalide and ginkgolide compounds that are known to have several important health benefits. They act as effective antioxidants and anti-aging agents. Ginkgo leaf extracts can also assist in improving cognitive function, reduce memory loss and help to treat dementia patients.

Ginkgo biloba extracts improve blood circulation which helps to enhance overall health and well-being. These extracts can reduce the symptoms of leg pain, Raynaud’s syndrome and other conditions associated with poor blood flow.

Although there is plenty of room for more research into the properties of this ancient tree, there are clearly many health benefits. With traditional medicinal uses covering many centuries, we can expect to see more Ginkgo biloba products readily available in the years to come.