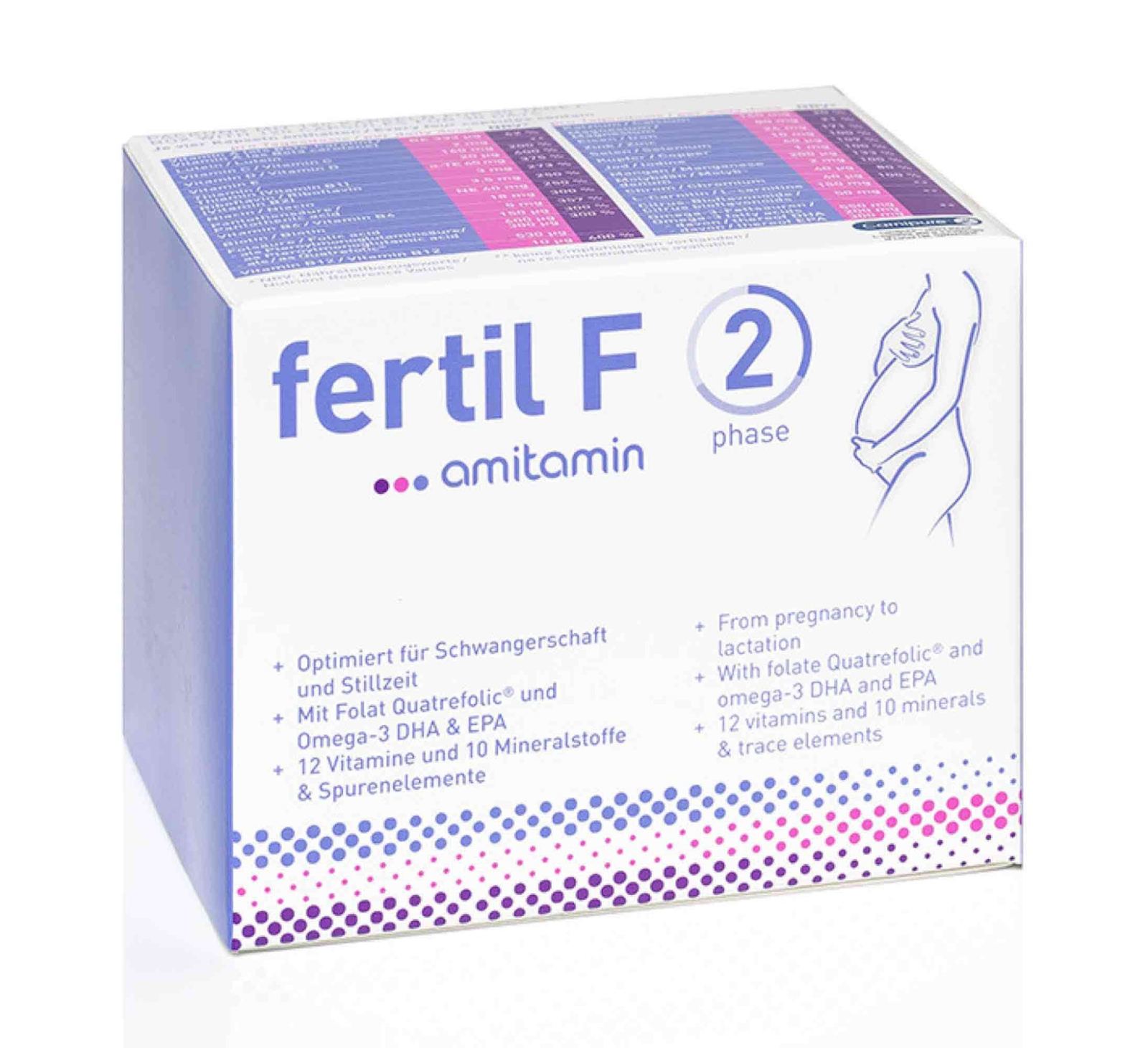 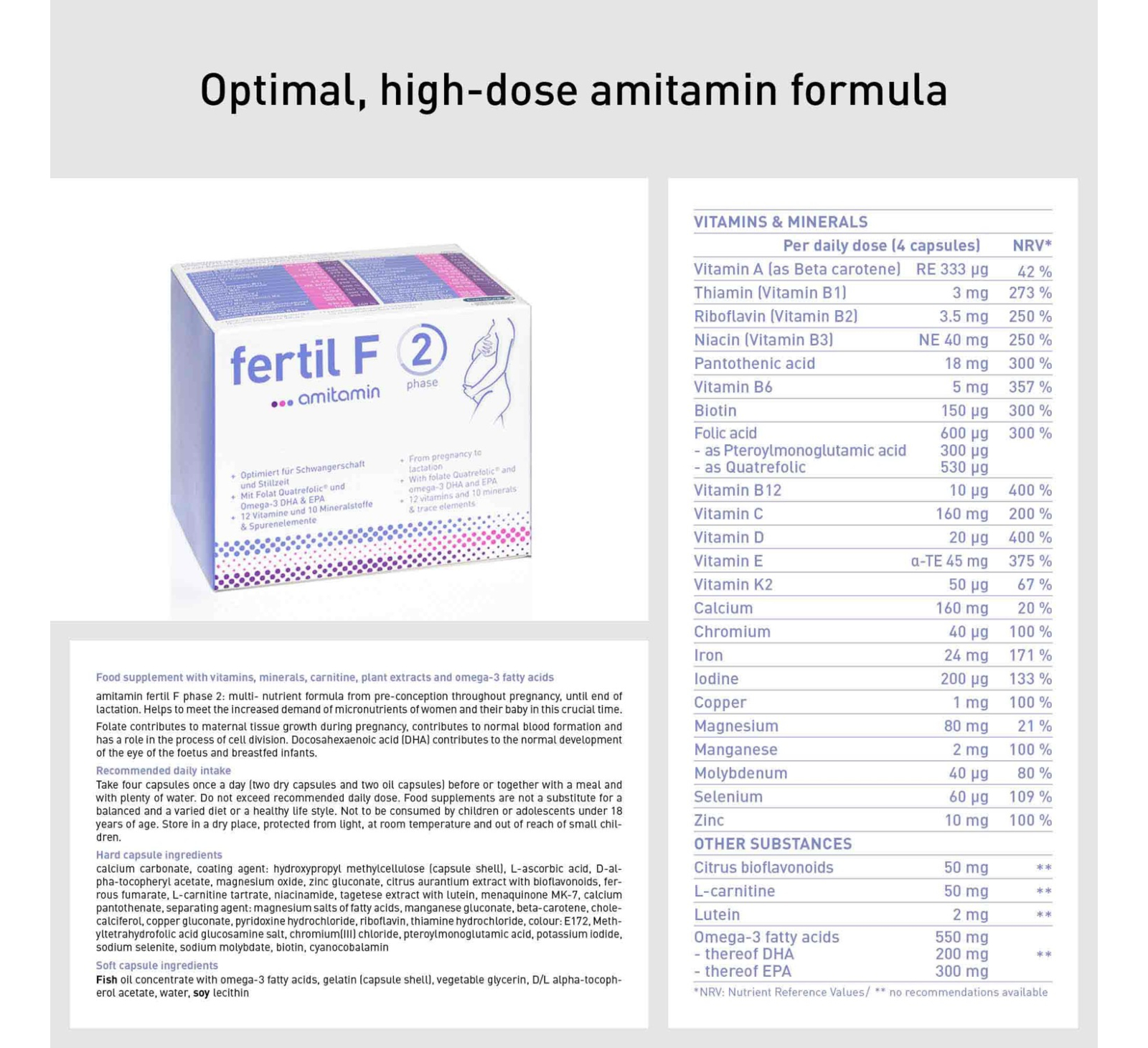 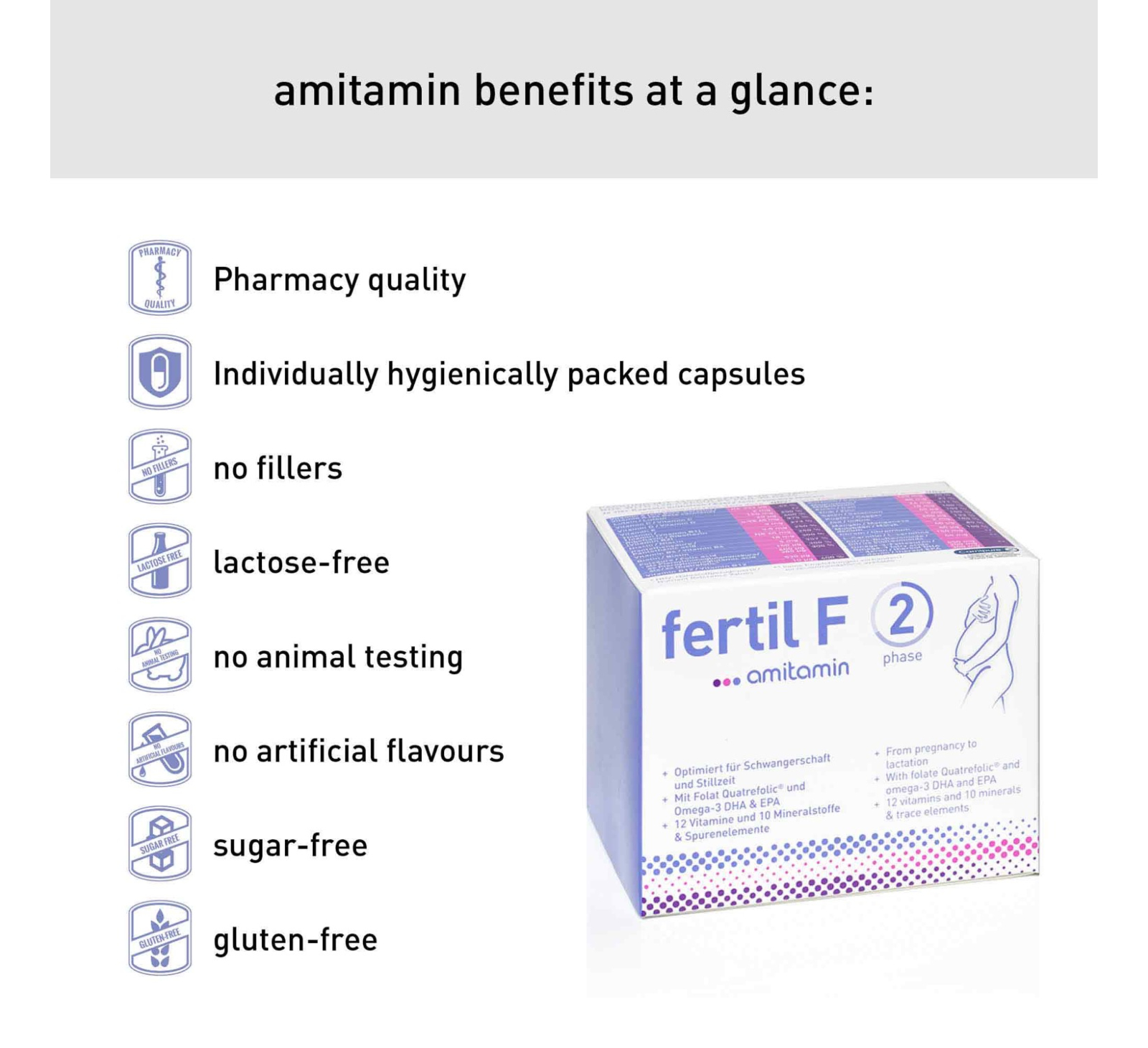 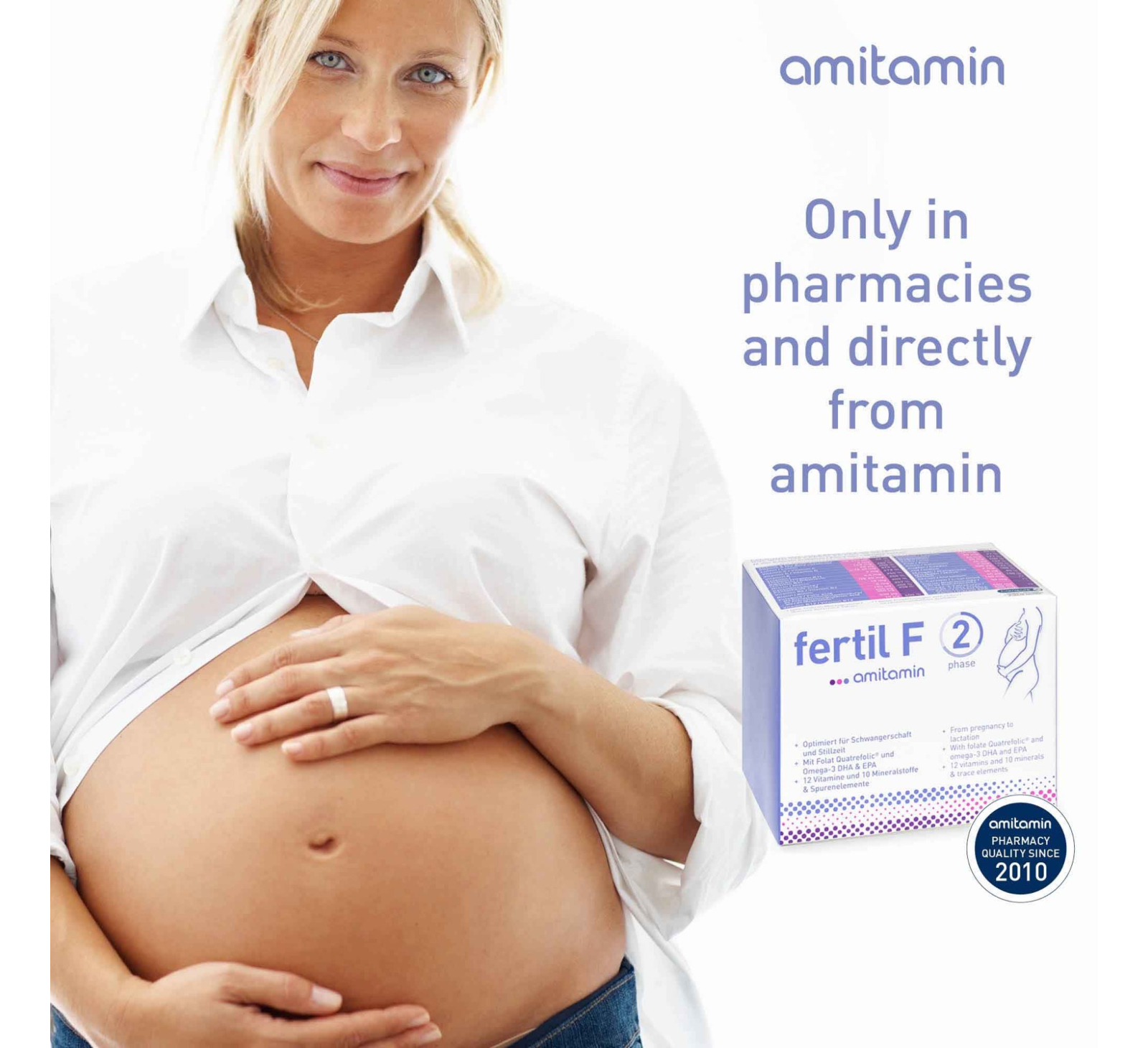 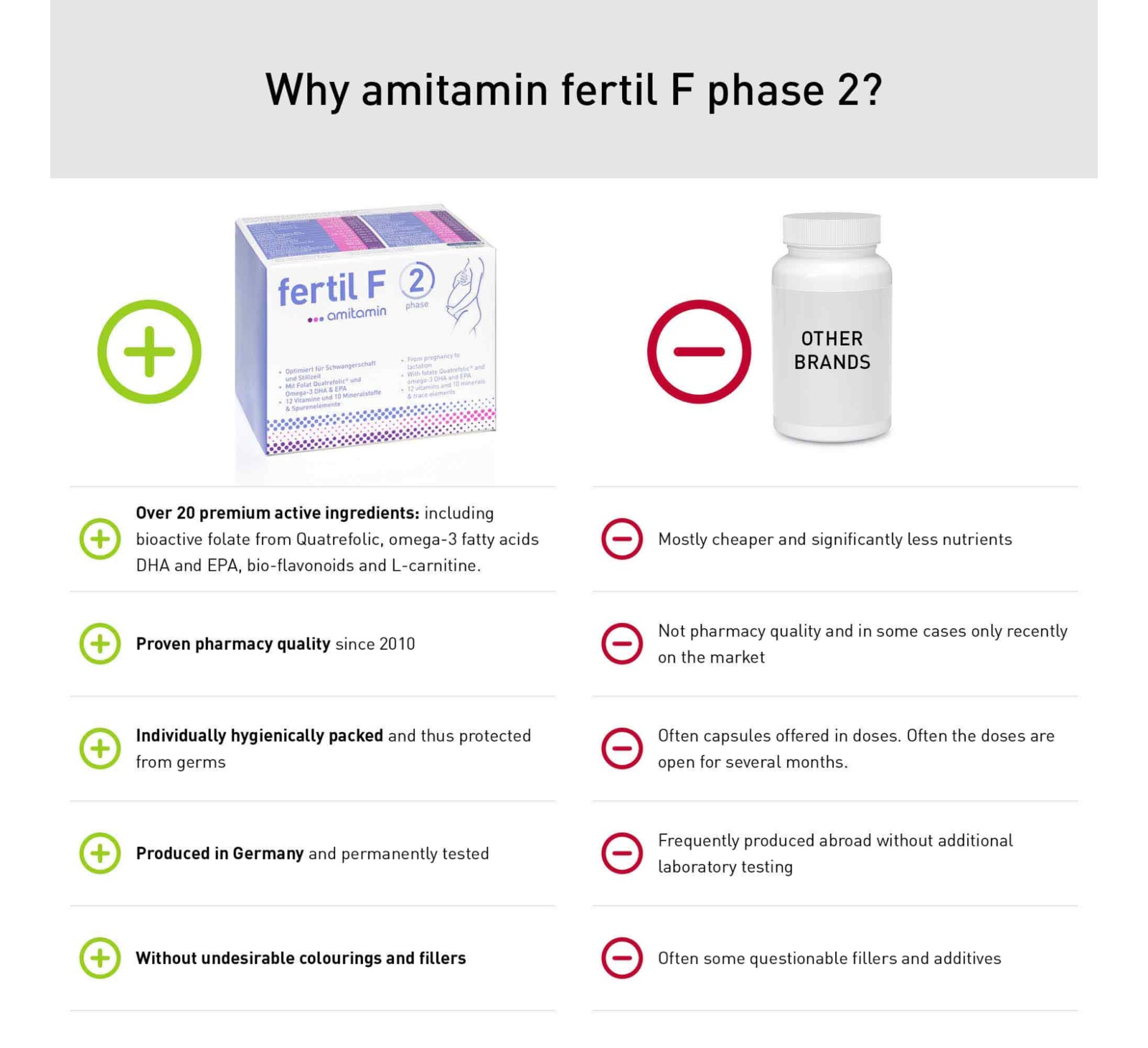 amitamin® fertil F phase 2 contains folic acid as well as the bioactive folate Quatrefolic®. It was developed for the special nutritional needs of women during pregnancy and lactation. At this crucial time in the life of a woman, nutrient intake requirements are significantly higher for most of the vitamins and trace elements. For the unborn and breastfeeding baby, it is extremely important to get the right amount of micro nutrients from his mother. During these early months in life, many of the developments of nerves, brain and body require a sufficient supply of vitamins, trace elements and minerals.

Eight good reasons why every woman should take amitamin® fertil F before pregnancy through to the end of lactation:

Each pack contains 120 individually wrapped capsules, intended for a one month's supply of balanced micronutrients. Available conveniently here in the online store.

amitamin® fertil F phase 2 is optimised for possibly the two most important times in the life of a woman: pregnancy and lactation. It contains an appropriate composition and dosage of vitamins, trace elements, minerals and in particular the valuable omega-3 fatty acids DHA and EPA. Due to the extensive formula and the increased micronutrient requirement, a daily dose of amitamin® fertil F phase 2 consists of four capsules (two dry capsules, two oil capsules).

Why should I start taking amitamin® fertil F phase 1 before a pregnancy is confirmed?

The vitamins contained in amitamin® fertil F can contribute to a healthy immune system, hormone balance, healthy nerves and energy metabolism (details below) even before pregnancy. In addition, the body’s own vitamin stores are filled up in time for the pregnancy. An adequate supply of folic acid to the mother before pregnancy is particularly important. A low folic acid level in the expecting mother’s blood is a risk factor for neural tube defects (spina bifida) in the developing fetus. These severe malformations of the spinal cord and brain already develop during the second and third week of pregnancy –often before the expecting mother even knows she is pregnant.

The intake of additional folic acid increases folic acid levels in the blood. This contributes to a reduction in the risk of neural tube defects in the fetus.Women who want to have children should therefore start taking folic acid at least one month before possible conception.They should also not stop doing so before the
beginning of the second trimester.

Why do amitamin® fertil F phase 1 and phase 2 contain both folic acid and folate (Quatrefolic®)?

Folic acid is the precursor of folate, which is active in the body. Folate is a B vitamin (B9), which is particularly important for cell division and for the growth of uterine tissue.
An adequate supply of folate is important at least four weeks before conception. Not every woman, however, can sufficiently convert folic acid into folate, which can be effectively used by the body.

The omega-3 fatty acids DHA (docosahexaenoic acid) and EPA (eicosapentaenoic acid) are particularly important to the human organism. These special fatty acids can be consumed in sufficient quantities by eating fish, especially high-fat sea fish.The body is not able to produce the special fatty acids DHA and EPA itself. However, DHA and EPA make an important contribution to the health of the mother and in particular to the unborn and breastfed child.

The consumption of DHA by the expecting mother supports the development of the fetus and infant’s brain and eyes. In addition to the recommended daily intake of 250 mg omega-3 fatty acids, an expecting mother should take a further 200 mg DHA. amitamin® fertil F phase 2 contains 550 mg omega-3 fatty acids, or 200 mg DHA and 300 mg EPA in each daily dose.

Why is the targeted supplementation of vitamins, trace elements and omega-3 fatty acids especially recommended for expecting mothers?

Pregnancy is a special stage in a woman’s life. The time from the fertilised egg’s cell first cell division of right up until the end of breastfeeding is characterised by particularly high nutritional demands. At times, pregnant women have a significantly increased demand for many vitamins and trace elements.

Generally, however, the calorie requirement during pregnancy is only about 15% higher than normal. A healthy diet during pregnancy is therefore mainly characterised by an increased supply of vitamins, minerals and trace elements. Food supplements are able to help in this particulartime to eliminate any nutritional deficits and to meet the special dietary needs during this time.

How should I take amitamin® fertil F phase 2?

Take four capsules daily, two dry capsules and two oil capsules with a glass of water or juice before or during a meal.

amitamin® fertil F phase 2 is generally very well tolerated. Please be sure to take the capsules before or during a meal. In rare cases of indigestion, please split the daily dose into two intakes per day of 2 capsules each.

How long should you take amitamin® fertil F phase 2?

What other functions do micronutrients contained inamitamin® fertil F phase 2 have?

What should be considered before taking amitamin® fertil F phase 2?

amitamin® fertil F phase 2 contains iodine. If you suffer from hyperthyroidism, please discuss your plans with your doctor. The daily intake recommendation must not be exceeded. Food supplements are not a substitute for a varied and balanced diet and a healthy lifestyle. Keep out of reach of small children. Store dry and protected from light at room temperature (5 to 25 degrees Celsius).

Quatrefolic® is a trademark of Gnosis S.p.A., Italy.

Keep the package dry and do not store above room temperature. Do not exceed recommended daily dose. Dietary supplements are not a substitute for a balanced and and varied diet or a healthy life style. Store out of reach of young children. If you have hyperthyroidism or if you are pregnant, you should speak with your doctor before starting to take amitamin® fertile F. Not for use in children or adolescents under 18 years of age.Take 4 capsules before a meall with water and food.

Customer satisfaction is important to us

to more than 20 countries

All products in pharmacy quality.

We ensure secure payment with PEV